skip to main | skip to sidebar

since we consider it our most solemn duty to report on all things waffle-related, we suggest you watch this.

if there was anything to ever get us cycling again, this would probably be it.


Posted by missyandchrissy at 3:15 PM No comments:

friends and acquaintances, as well as most of the pop culture-y literature that we read, have been raving to us about the office for awhile now. and i'll admit it - in the beginning we were just boycotting on account of the fact that we felt nothing could ever, ever, top the original series, so we wouldn't bother watching the shiny new american version. and we didn't. but then we were told we were being stubborn, so to prove how not stubborn we are, we gave it a shot, and it didn't hold our interest, and we went back to not giving a hoot about the show.

so today a few coworkers were going on and on about it, and realizing that i did in fact respect their taste in television, thought i'd give it another try. and we did. and yes, well, this evening we realized that loveandcyanide is just not a fan of the office, no matter how hard you try to make us think that we will be a fan of it, michael scott and co. really just don't do it for us.

speaking of things we're disliking - what is the deal with toy companies reissuing and then RUINING classic toys from our childhood. first it was the bastardization of the carebears and my little ponies....now they've managed to sluttify strawberry shortcake?! what the hell.

Posted by missyandchrissy at 11:07 PM 6 comments:

and all these years i sat around thinking the only thing i could ever win the gold in was daydreaming! i knew my sign had to be good for something, and that missy didn't nickname me 'fishtina' for naught. where are my goggles?


Posted by missyandchrissy at 6:04 PM 4 comments:

the good, the bad, and the ugly: disastrous late-august edition.

the good: be kind, rewind.

we've been wanting to see this movie since we saw previews for it months and months and months ago. we slacked on seeing it in the theater, and then slacked on putting it on our netflix, and so here we are finally seeing a movie we were super-excited about almost a year ago. well, it was totally worth the wait - it was the most heartwarming movie we've seen in awhile. we've already added it to our '08 xmas list as we're complete suckers for films where the whole town bands together and accomplishes something magical.

i'm sure its happened to us all - we eat something a bit too hot and wind up scorching our poor tongue. i scalded the poor little muscle SO viciously earlier this week that i still, three days later, am feeling the burn and not tasting anything properly due to fried taste buds. the irony of it all is that i burned it on soup that i was having to soothe a sore throat. oops. my mouth totally hates me right now.


the ugly: scent of a microwave.

have you sniffed yours recently? after a salmon feast in our apartment last night, i went on a rampage trying to eradicate the odor from the kitchen. having worked myself into a bit of a cleaning frenzy, i took a whiff of the microwave to make sure it too didn't smell like the inside of Bear's tummy. and oh, it was much, much, worse: salmon mingled with popcorn!

holy cow. we have a new worst nightmare, and its being suffocated to death by salmon-popcorn perfume.

Posted by missyandchrissy at 11:01 PM 2 comments:

okay, has there been a julia child as a spy rumor going around for a while that we just did not know about?

i swear this news just came out of nowhere for me. i'm not sure if everyone else in the world was surprised as well, or perhaps i've been living under some sort of rock.

also, the CIA is releasing the identity of 24,000 spies today (23,999 not counting julia). really? 24,000?? how is it possible i, or at the very least, bear was not invited? also, second point- isn't that dangerous? or do they not care if the elderly ex-spies are assassinated?

anyway, i'm hoping this can clear up the chuck barris myth for me as i have been obsessing over his CIA claims ever since watching Confessions of a Dangerous Mind.
Posted by missyandchrissy at 10:44 AM No comments: 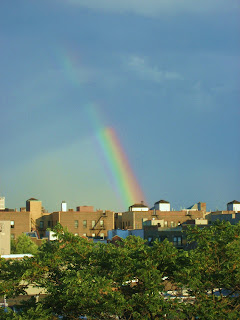 i haven't seen a rainbow in ages, but after a sun shower yesterday evening there was a pretty awesome one waiting for me when i got home from work. this was the view from our balcony.
i had 'the rainbow connection' stuck in my head for the remainder of the night (not like it takes very much to get muppet songs in our heads).
Posted by missyandchrissy at 10:29 AM 3 comments:

i can't really explain why we've been such slackers recently. although that new format (well, now partial new format - we realize, surprisingly, you kind of like us better when we ramble) energized us for a brief 48-hour span (no surprises there though), we quickly lost our steam. we do apologize - i'm blaming a lot of things on late-summer laziness lately, so add this to the list. i wonder how many years one has to be out of school before they stop feeling the summer vacation/fall motivation cycle?

anyways, for you, our five wonderful loyal readers who stick by even when we slack, we are going to try to be more consistent again. we promise.

so our across-the-hall neighbors, the only folks we share a floor with, had a baby last week. missy and i are shocked and appalled. why didn't they inform us of this life-changing event?! we had to learn of this new development via a bunch of pink balloons on their door. there should be some sort of law that a couple needs to inform their neighbors when they are about to completely ruin the Melrose Place-ish young-professional vibe of their building.

and how are we going to continue to throw our world-class parties with this easily disturbed little being lurking around? we're going to have to send our guests home at 7pm. and now forget about my photo booth/confessional-in-the-hall dreams! (although this does explain why a couple with a 2-bedroom needed to take over the hall closet.) sigh.

(i am well aware, as i rant about my neighbors who are probably my age procreating, that i completely immaturing. i am starting to think i peaked around 15, and its all just going downhill from there. i suppose that's what i get for trying so hard as a child to act like a grownup).

i don't know why, but i hate brushing my teeth. i think its because i bore easily and teeth-brushing can become the most tedious task on earth once it passes the 40 second mark. i used to date a guy who would spend ages in the bathroom on his teeth - and although give the way things turned out, he was probably just in there avoiding me - i really do wish i had his commitment to dental hygiene. i'm certain my dentist does too, as he yells at me about flossing more often every time i'm there. i know, i tell him, i know i'm risking ruining my gums, but that extra two minutes in the bathroom fidgeting around with that dental twine is torture.

well, little did i know that i've been doing it ALL WRONG this entire time! i've been purchasing Reach floss all these years, meanwhile Colgate Glide floss was slipping by me. i tried it last night and seriously, it was like flossing with silk. or clouds. or the strands of hair from a goddess. something magical like that.

and speaking of magical moments, this morning as i waited at the corner to cross the street to my office i noticed that our usual traffic cop wasn't there. instead he was replaced by three other traffic cops, standing together in a row, waving the cars along. i couldn't help but be totally entertained by their synchronicity, neon safety vests bobbing together in pedestrian-friendly unison.

Posted by missyandchrissy at 11:42 AM 5 comments:

not like this hasn't already been apparent from our recent astronomical grocery bills, but when you start receiving emails like the below, it really hits home that the economy is in shambles. 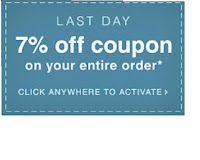 missyandchrissy
When our mother was pregnant chrissy requested a dog or a brother. She got missy. The rest is history.